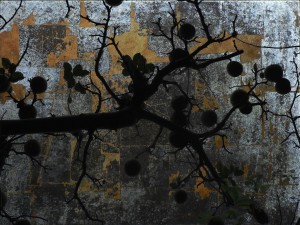 I have now settled in the southeastern part of Sweden and it feels like coming home again after 25 years in Copenhagen. I have my root at the central part of jutland and the landscapes here are reminiscent of the primeval landscape in Mols Bjerge, Djursland. The distinctive ice age landscape where man has lived for millennia has always fascinated me. Here you can spot the primordial soup if you take the time to do so.

Wavy landscapes and apple trees along the coastline characterize the southern part of Scania. My childhood landscape was marked by a similar landscape including a plenitude of old apple trees, but wheremy father, specialized in pruning, and talked about harmony and balance between the branches, my mother was interested in the old apple varieties. The summary of these experiences became visceral and imaginary, which made branches seem to grow out between my fingers. I often find myself along the coast where the old apple trees speak to me as individuals with whom I personify with great empathy. The actual space between the branches is a concept known in Japanese gardens as ‘Ma’, which is akin to the silences between the notes in the music.

When I look up in the clear light of the sky, and the spaces arise between the branches and the sky, in a most distinguished manner, one is reminded metaphorically of the breaks needed in order to find balance in life and in the soul. Sometimes we need to stop for a while for the very experience of God’s creation to take over. There are many of us who forget this in the pursuit of other virtues.

It is a sensuous experience to look up at the sky through the bony arms of branches, the abrupt torsos that draw graphic silhouettes against the blue. During the winter, when the leaves have fallen from the trees, I feel almost majestic when experiencing the trunks in the forest, which often stand as single individuals – sometimes alone, at other times clustering together in groups – just like humans.

A single tribe steps out of the morning ice with its cool cloak in divine blue. Here I get my inspiration, here I get ready to capture the moment.

The artistic process and traces of human existence and presence

First, I prime the canvas with many pastose layers of chalk that are applied to a substrate in the form of a canvas or plate. Then I apply the oil paint and create an overall structure of decomposed sheet metal to create an architectural dimension so that the canvas does not appear as ‘Tabula Rasa’. That is my starting point, this is where my work starts. Alchemical impacts become tracks and cracks, and discharges are formed on the surface under the chemical influence to which I expose the canvas. Slowly, threads are shaped and like clues, form stories and narratives – like metaphors. There is a transformation over time, which I myself control with my own inner compass.

During the work process, it is about breaking down and subordinating oneself to the structure of the motif. Some parts are illuminated, while other parts are produced by chiselling until the whole composition appears as a tight structure, where a kind of structural backbone is formed in each individual work. It can easily become a nerve-wracking exercise when you forget yourself in a work process where it is often better to clean away than to continue the process of ornamentation. It takes artistic precision and special skills to keep the reins – mostly to avoid feelings of chaos taking over.

When my work appear three- dimensional in the transition between figuration and abstraction, it becomes like a mental journey that I never get tired of exploring. It has taken at least 20 years to develop the various techniques that I now use and mix into a variety of new assemblies. When I let the two worlds merge into one, it is as if a new form of aesthetics is taking shape.

The color of the universe

Throughout my life, I have worked with a very modest painting palette, as it is not the colors themselves that inspire me to move on, but the storytelling itself. I communicate through my imagery. The color palette is muted, but the blue color is always present as it comes from the universe and adds calm. I mostly work with the tertiary color scale, where many varnishes are applied with a fan brush in thin layers, so that previously applied shades are visible through each coat of paint. The colors achieve depth and viscosity through the quiet work processes that mostly take place in tone to tone application of a color.

An inherent longing for nature

Throughout my art practice, I have worked with nature and the theme of transience. My work deals with thecyclical nature of time, where I still examine nature’s inherent beauty, fragility and man’s extensive and negative imprint on the environment. This is often in a parallelization between the cycle of nature and the cycle of human life. I use strong visual metaphors that make us stop and perceive conditions that might otherwise go unnoticed.

Pictures should not explain, but the mind may like to ponder. Further, it is not the intention that one should be able to read the motifs unambiguously. There must be something for the viewer to explore. I would like to investigate how perception through aesthetics can help form the basis for new ethics and spaces of understanding.