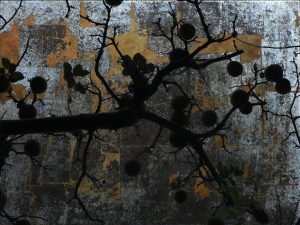 Anne Maria Udsen’s diverse practice ranges from drawing and painting to graphic work and mixed media. A recurring element in her work is an exploration of the continuous cycle of life and death in nature and a fascination for the beauty in decay, which she treats with her own original techniques. This seems to flow like an undercurrent, and a scrutinising look at human behaviour is embedded in many of her works.

Udsen’s work holds great beauty, but she often explores a more sinister and menacing vision of nature. In her photographic series “Distorsions”, an intense observation of dried agave leaves and the light falling on them heightens the viewer’s attention to the thorny and tenacious plant with teethlike ridges. The sharp shadows that fall on the surface below visually become part of the plant like multiple black leaves, changing its shape and pushing the image towards abstraction. The distinctive agave leaves are still recognisable, but the subtle shift in shape and the close-up views of the wrinkles of the dried, leather-like skin and their sharp thorns add an almost threatening feel to the pictures. In the series “Genesis”, Udsen works with botanical elements as well, as she explores the consequences of genetic engineering and the modification of nature. The thick, fleshy casings of  horse chestnuts or the poisonous fruits of jimsonweed take on eerie forms, their spikes reaching out like fingers as they take shape only to morph into something else, recognisable, yet unfamiliar and unsettling. Through her work, she investigates how nature can be altered, held against the idea that nature has intrinsic value and beauty such that we may want to protect and preserve it, or at least leave it alone. Biotechnology has advanced rapidly, and today scientists can edit the genomes of plants, animals and humans; it is no longer a question of whether we can do it, instead, it is a question of whether we should.